The weaving method of the tablet woven border from Dürrnberg

The weaving technique of the Dürrnberg border at first sight seems rather simple. The border is divided up into two different pattern woven sections with a warp twined blue middle part of 4 tablets. Towards the sleeve a single warp twined blue cord made with one tablet edge the border and at the opposite side the pattern weave end with no solid edging. The outer edge of the border is uneven and seems not well suited for the extra wear the outer part of a sleeve will be exposed for. 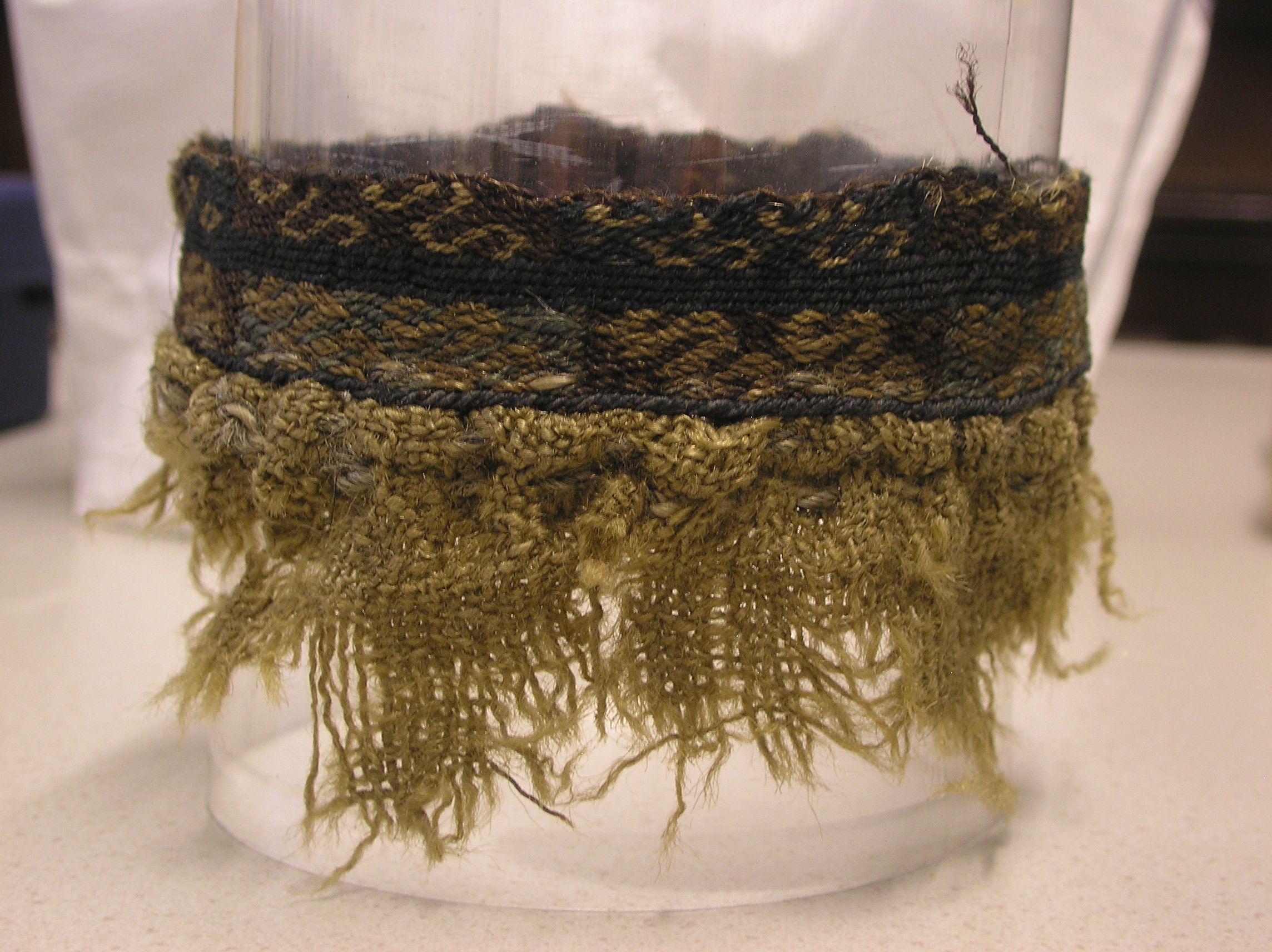 Tablet woven border from Dürrnberg  in Austria sewn to an edge of a woollen fabric – presumably a sleeve (No. 4470). Dating first half of 3rd century BC.

The border is incredible well preserved, but as the warp threads are beaten hard together it is very difficult to establish the amount of tablets used to produce it. Furthermore the warps are made of plied yarn which thread course are more difficult to follow than single yarn is. It is in no way allowed to unravel a tiny part of the weaving to understand the threads course of an archaeological find and thus the only way to establish the original weaving method is “Try and error”.

A thorough study of the border under microscope was undertaken. Several macro photos was made and then a work began were repeated analyses, drawings of the thread course and hypotheses about the weaving method was followed by practical attempts to make a reconstruction. A long experience and a thorough understanding of the possible thread courses in tablet weaving are essential in this work. For a long time I was unable to find a weaving method where the physical laws of tablet weaving and the actual thread course of the Dürrnberg border corresponded. The problem was that there are three colours in each tablet in the pattern, but only two are in use in each square of the pattern. The wavy line is light colour and in one square the background is blue, while the back ground colour of the following square is brown. A colour change of this kind is not possible as the undesired colour will come to the surface at certain times, when the tablets are twisted no matter if the tablets are triangular, square or another shape. But using the method of experimental archaeology – trying the working methods yourself – gave a new idea. What if the weaver had overruled the laws of tablet weaving and just avoided the undesired colour by pressing the threads of this colour below the weft with the shuttle? The practical weaving process showed that this was exactly the method used and furthermore revealed, that it was very easy to work using this method.

Threading of the tablets of the border from Dürrnberg. The warps are mainly S-ply wool and the weft double horsehair. 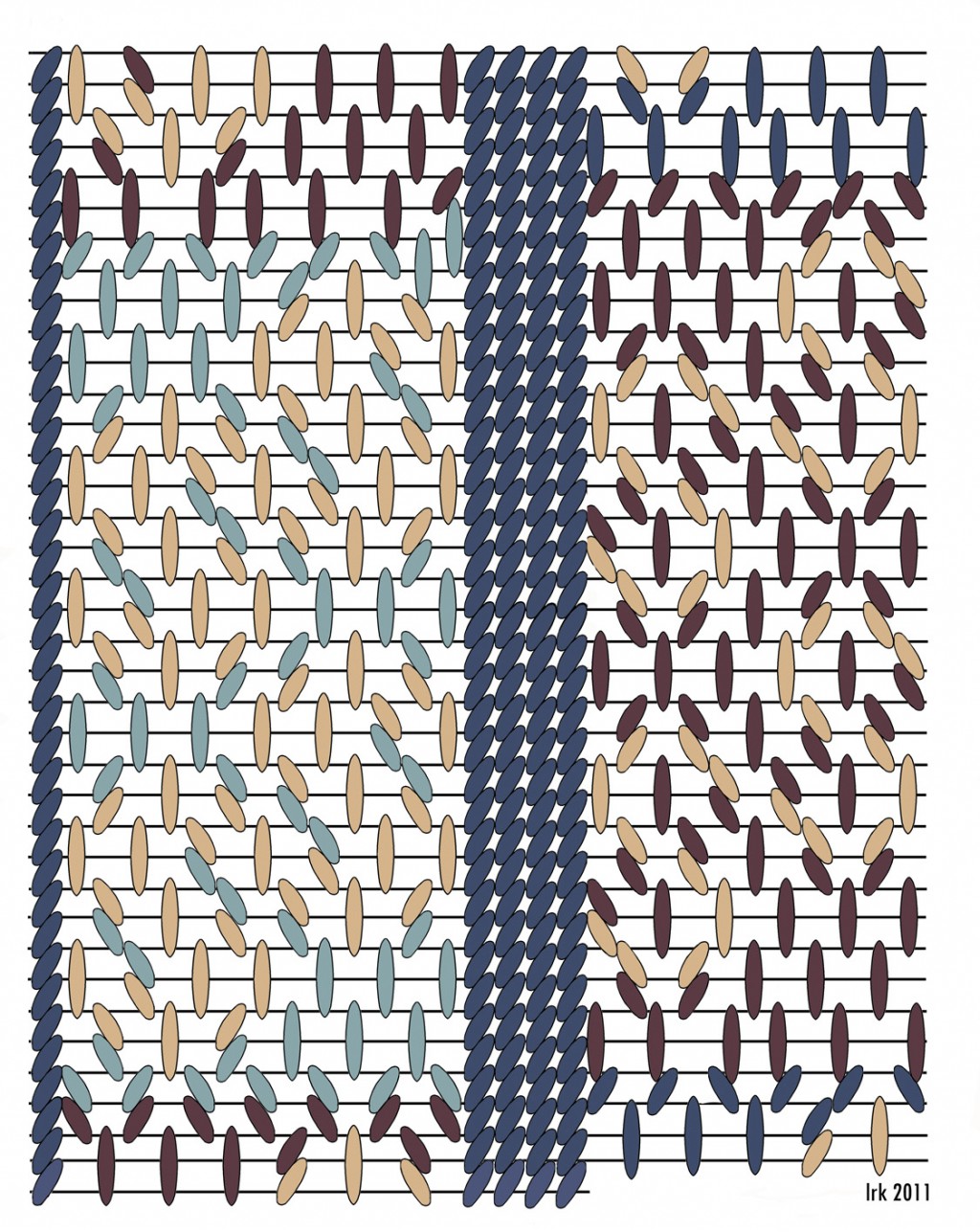 Analysis drawing of the tablet woven border from Dürrnberg.

Drawing of the pattern construction of the border from Dürrnberg

But yet another problem aroused when the colour change of the background was to be woven. As there are three colours in each tablet and an empty hole it is not possible to change colour of the background without changing the turning direction of the tablets. That is when the colours follow each other in the tablet like this: Empty, brown, white, blue and you want the blue colour to take the place of the brown colour in the turning sequence it can only be obtained by changing the turning direction. When the turning direction is changed also the diagonal line which makes the wavy light pattern nice and equal will change and it will be uneven and scattered, which are not the case with the original border.

It turned out that a way to obtain the same pattern as the original was to change the order in which the single tablets followed each other in the bundle. As the tablets are not threaded from the same direction, the order in which the colours will come up and the direction of the diagonal line of the white pattern of single tablets are not the same. It was thus possible to pick a tablet out of the bundle and place it differently. For instance tablet number two and three could change place in the bundle. In this way – which are easier to show than to describe – in turned out to be possible to obtain a colour change of the background as on the original border. 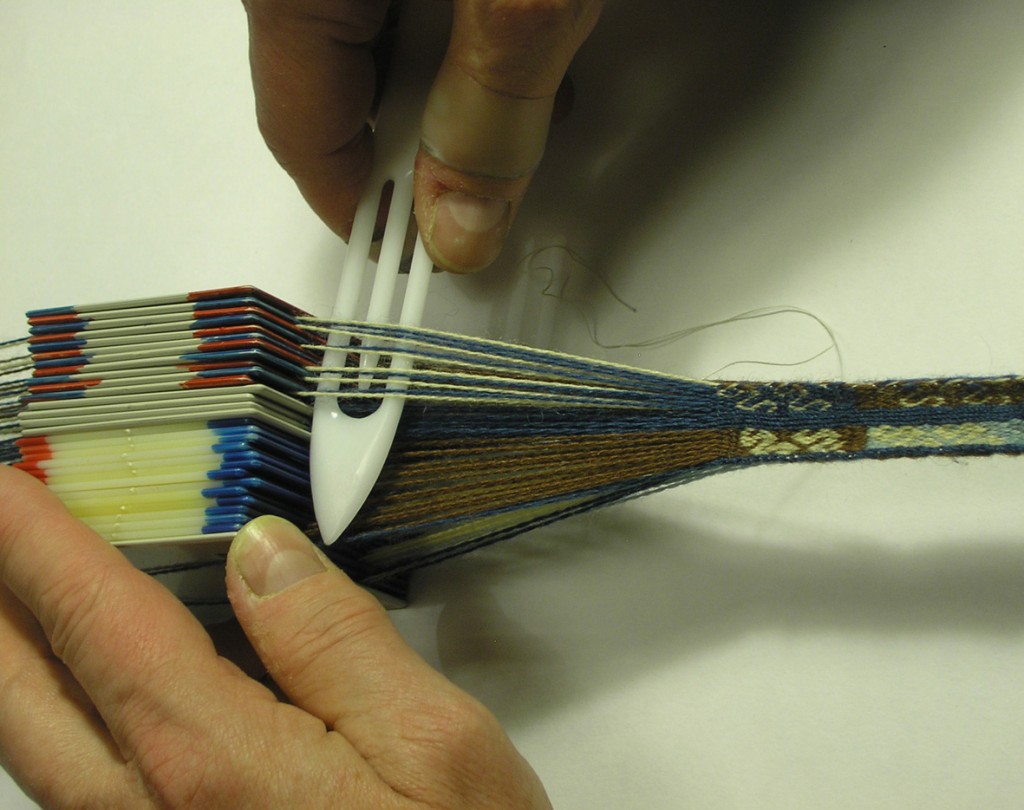 Weaving a reconstruction of the border from Dürrnberg.

The entire band was made using 29 four-hole tablets. At the edge towards the sleeve and in the middle section there are 1 and 4 tablets each holding 4 blue threads. At the outer edge the border does not have edge tablets. In the two pattern sections there are 13 and 11 tablets. The pattern of one section is a waved line two tablets thick. The other section has exactly the same pattern but only with a thickness of one tablet.

The blue edge tablet and the blue warp twined section in the middle are threaded from the same side and the weaving method is straight forward quarter turns.

This means that the weaver had to have many variables in focus and give them equal attention to produce the pattern in the right way. In the pattern – especially in the background colour transition – there are many small errors which are hardly visible to the naked eye. These errors are different at different places where the same pattern is repeated. This means that the weaver had a thorough understanding of the weaving system and had not memorized it or used a written pattern.

The pattern seems to continue right to the point where it was cut. This makes it likely that this sleeve border was only a part of a longer band.